This is an open-access article distributed under the terms of the Creative Commons Attribution Non-Commercial License (http://creativecommons.org/licenses/by-nc/4.0/), which permits unrestricted non-commercial use, distribution, and reproduction in any medium, provided the original work is properly cited.

1. The need for research

Dental caries and periodontal disease are the two major oral diseases that the majority of Koreans suffer from. Dental caries, a major cause of tooth loss, is a disease that usually occurs and accumulates within two years of eruption and continues to develop. In addition, since periodontal disease begins to occur during the upper grades of primary school and increases during a person’s lifetime, the oral health management ability of the primary school, the children in attendance, and the overall oral environment will influence lifetime habits for oral health1,2). Dental plaque is a representative cause of these oral diseases. The lack of tooth brushing after eating can cause dental plaque in the area where oral hygiene management has been neglected, leading to bacterial adherence, acid enamel corrosion, and inflammation. This can result in dental caries and periodontal disease3).The most basic and effective way to manage dental plaque is tooth brushing4).

In the 2012 survey5), 57.35% of those surveyed had permanent dentition caries at the age of 12. The DMFT Index (decayed, missing, or filled teeth) is at 1.8 for major industrialized countries, but has a world average of 1.67 (189 countries, as of 2011)5). According to the “Practice rate of tooth brushing after lunch” of school-aged Korean children, it is reported that from 7 to 12 years old, the rate decreases from 24.7% to 16.9%. This is more than two times the difference compared to deciduous dentition5). The primary school’s tooth brushing facility should be designed to develop a tooth brushing habit for school-aged children. Providing a tooth brushing facility within the school’s primary educational area for the children can lead to proper oral management and tooth brushing after lunch. It is a program that aims to improve the ability of students to manage their oral health6). Oral care for primary school children is a top priority among the national oral health care industry. The goal of Health Plan 2020 in Korea is to focus on oral health7). The target is to have 76.0% of primary schools install proper brushing equipment for children to encourage proper brushing habits leading to better oral health7). There is a plan to equip the tooth brushing facilities with the proper equipment, including toothbrushes and storage for them, but the actual discussion about the most effective installation structure to form tooth brushing habits has been excluded. In the related studies, there were studies on education through a children’s tooth brushing education program8), evaluation9) of the short-term effects of the tooth brushing room, and effects on practicing tooth brushing10). However, the long-term follow-up of changes in habit in the same subject has been insufficient. This is a follow-up study11) of the result of the “Tooth brushing room operation,” the author’s previous study. The result of the one-year tooth brushing room operation came from brushing, oral hygiene status, and oral health status. Based on this, we can provide concrete installation guidelines for the tooth brushing room installation project in Korea and basic data for providing effective structures to increase the practice rate of tooth brushing.

In Korean primary schools, a child’s oral health education is the role of the school nurse. Therefore, the school nurse’s interest and role is the most important factor for the success of the primary school oral health project12). However, school nurses are not able to educate children on the proper tooth brushing technique because they lack the appropriate facilities and items, such as a wash basin. This is an obstacle in forming an actual tooth brushing habit in children. The purpose of this study was to develop the most effective tooth brushing environment to improve the intervention effect, such as the development of the oral health education program.

This study was a prospective study intended to analyze the long-term changes in the “Brushing practice rate, oral health index, and oral hygiene status” of higher grade elementary school students by establishing facilities where students could practice brushing after eating in the school cafeteria. This was a prospective study comparing the before and after of the experiment based on the “Non-equivalence experimental group,control group” (Fig. 1). 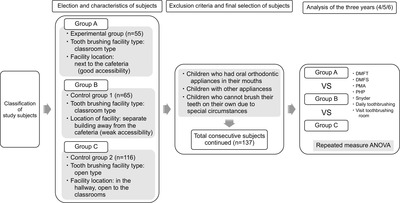 The study was conducted under identical conditions to examine the tooth brushing education at three elementary schools from June 21, 2010 to October 25, 2012. In addition, the results of the 2015 from December 15, to March 31 survey were analyzed again. These schools were similar in size and character to the ones that were selected for the project. Among them, the primary school in experimental Group A was the first school to have a prepared tooth brushing room in Korea. It was equipped with a classroom next to the cafeteria that had been operating continuously for five years before the study had started. The primary schools chosen for Control Group B and C each had a tooth brushing facility installed. The school in Control Group B had the same tooth brushing room type as the school in Group A, but the room in B was in a completely separate building from where the cafeteria was located. The tooth brushing facility at the school in Control Group C was located in a an open corridor. All three schools had the same tooth brushing education and materials, leading to the voluntary participation of the primary school children and the supervising school nurse. The subjects of the initial study included 236 examinees. The follow-up study was the same for all primary schools and excluded children who had transferred to other schools, those that did not participate in the oral examination, and those that already had a special oral environment. As a result, 143 children in the 4th Grade were examined. The children participated in the continual study for three years, up until the final year of the study which took place when they were in 6th Grade.

During each 12-month cycle of the oral health management process13), the researcher visited each school once a year for three years. The researcher conducted individual interviews on the reality of oral health and surveyed tooth brushing practice through examination.

According to the WHO’s criteria14), the dentist examined the main factors affecting oral caries and oral caries with “flat gingiva with the light on the tip under natural light” through preliminary training. The Gingivitis Index and the Dental Plaque Index Test were also utilized in the oral hygiene status evaluation and were performed together.

In order to evaluate gingivitis, the researcher divided it into three parts according to the position of the papillary papilla, marginal gingiva, and attached gingiva. Doing so examined the presence or absence of inflammation corresponding to the “P-M-A” area. The Gingivitis Index was calculated as 1 for inflammation and 0 for no inflammation. The lowest value was 0 and the highest value was 3015). The higher the PMA Index score, the more susceptible the person was to gingivitis.

A dental plaque was made of the lower first molar teeth and placed in a separate incubation using a “Modified Snyder Test” that used dental cotton rolls with individually disinfected bars. The handle bar was then broken, the cap was covered, the number for each individual test label was marked, and the test pieces were incubated for 48 hours in a bacterial incubator maintained at 37℃15). For the result value, the acidogenicity was determined by the color change during incubation. The following lists the value of each color: blue represented 0 points and showed inactivity, green represented 1 point and showed a hardness activity, yellowish-green represented 2 points and showed moderate activity, and yellow represented 3 points and showed high activity. This indicated that the lowest value is 0 and the highest value is 3. The higher the score, the higher the dental caries activity.

After receiving consent from the principal and the school nurse, an official school letter was sent out to each student’s home to explain the study. Children with prior consent from their parents were selected for the study. The school nurse and dental hygienist explained proper tooth brushing rotations and conducted regular tooth brushing practice and oral health education. Primary school children were informed in advance so they would be aware of the tooth brushing facility. Each year, they regularly visualized oral microorganisms through phase contrast microscopy to enhance their motivation for tooth brushing education and practice. The tests were unified according to the standards set by the World Health Organization14) as well as through the training and discussions of the dentist and dental hygienist. The time for the study was from 9:00 am to 12:00 pm under the same conditions for each school.

The homogeneity test between the experimental group, control group 1, and control group 2 was verified by comparing the DMFS (4th Grade), a representative index of oral health, through a one way ANOVA. Comparisons of the changes in dental caries status and oral hygiene status between the 4th, 5th, and 6th Graders were analyzed by the Repeated Measure ANOVA (post analysis: Scheffe). The significance level of the study was selected as <0.05. All data was analyzed using SPSS Version 20.0 for Windows.

In order to protect the ethics of the subjects, the researchers received the approval (No. UC 2015-12-007) after the IRB deliberation by the institution’s bioethics review committee. With the consent of the school principal and the school nurse of the schools participating in this research project, the subjects voluntarily participated after the purpose of the study was explained to them and notification was sent to the parents.

The children were told that they could withdraw their participation at any time during the survey, and that there was no disadvantage to participating in the study. In addition, we made it possible to contact us in case of any questions or problems. We also explained that the collected data would be anonymous and used only for this study, and that we ensured absolute confidentiality.

2. Change in the number of caries experience in teeth

the DMFT Index (decayed, missing, filled teeth) and DMFS Index (decayed, missing, filled tooth surface) were higher as age increased depending on the progressive nature. The DMFT Index was less than 2 in children in the 4th Grade. However, at the time, children in the 5th Grade in Group C showed 2.28 (±2.33), which is the highest among the three schools (>0.05). In the 6th Grade, only Group A showed 3.00 in the DMFS Index. The other two schools changed to 3.03 and 3.83, respectively, but there was no statistically significant difference (>0.05). Both the DMFT Index and the DMFS Index increased over time in all groups, showing as statistically significant (<0.001). There was no difference in DMFT and DMFS between the groups (Table 2).

Table 2 . Comparison of oral index according to time between groups (N=137).

3. Oral status index according to the patient hygiene performance index

4. Gingival index according to the PMA index

The author wish to thank all the subjects who volunteered to participate in this study. This manuscript is a revision of the first author’ doctoral dissertation from Dankook University. Author also wish to acknowledge the support of Preventive Dentistry, College of Dentistry, Dankook University and the public health center at J in S, Korea.

The authors declare no conflict of interest.